L.A. weather has taken a turn for the hotter, and I'm definitely feeling it. Since I spend most of my days incubated in a cool building, I'm usually oblivious to what everyone else outdoors is feeling. I was off from work today though, and took my parents to the airport, so it's been a rude awakening for me. At my last job, I would sometimes look out of the window and daydream about being a construction worker - doing my work, being outdoors, not taking work home with you (literally and mentally)... not on a day like today!!

All this to say what? Erm... I haven't sewn anything new... I bought some new clothes! But nothing sewn. With my parents here, I've just wanted to relax with them, and the thought of carting out the large table and taking up half the living room to trace and cut and whatnot, was too daunting. I finally went to Joann's and picked up a few more Simplicity patterns after I dropped them off at the airport. (Whaaat? Didn't she say no more patterns?). I'm going to look them up on PR now to see what others have done with them. Hopefully my sewing mojo will fly back in the door... like tomorrow morning... hopefully.

Oh, before I go... I once mentioned a Nigerian snack called Chin Chin that I made for my brothers at Christmas time. My parents brought me some as well, and I took a picture. When you roll out the dough and cut it, you can decide what shapes you want. In my family, we usually make twisted "8"s out of the dough. Takes a lot longer, but for some reason the shape makes it seem yummier (kinda like different pasta shapes, right?). Okay, enough talk. I give you..... CHIN CHIN! (click pic for a close up) 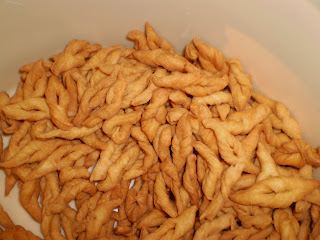 Oh yah, and by the way, I'm now 31! I'm hoping the batch of memory cells that seem to have turned off in my brain when I turned 30 will find a way to renew themselves? I'm having a hard time dealing with the memory loss that comes with age... aren't I too young to start forgetting things, or is it just me?
Posted by Sew Shy at 4:40 PM