Today was "get some of that housework you've been slacking on done" day. Once I was finished with the cleaning I had planned for the day, I went to the Salvation Army store to drop off some books, shoes, and pants (the latter two brand new, so hopefully they'll make someone really happy!)
Well, you know how it is. You drop your donations behind the store and then, naturally, you go in to take a peek at what they've got for sale.
I've been needing a little lamp on a tall dresser I have, and here are two beauties I found!! 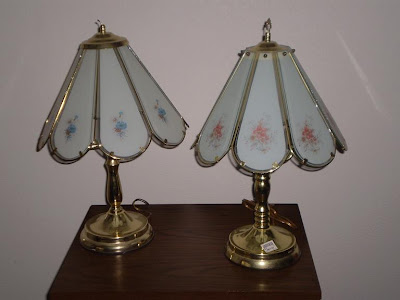 When I tried them in the store, I couldn't figure out where the knobs were, so I assumed there were none and the bulbs had gone out. In spite of that, I couldn't resist the price - $2.99 each - so I figured they'd just be pretty display items if they didn't work.

Well, I just tried them at home and realized they're the kind of lamps you tap to turn on - and they're three-way. I have a lamp like this already, but it's more modern. I was so excited about having these with the same feature, I called my hubby to show him (not a small feat, as he was watching a movie and very much into it). His response? "Oh, of course, my mother has a lamp like that, didn't you know?" Well duh, if I did I wouldn't have dragged you away from your movie, would I? Tee hee...

I'm actually thinking since I got a "pair" (they're similar enough to call them that) I think I'll use them in the guest room instead - and move the one lamp I have in there to the spot where I needed one on my dresser. Problem solved!

Okay, so of course I saved the best for last. What else did I stumble into? I was perusing the furniture and stumbled into a curious looking little desk. It looked so plain, I was intrigued. Well guess what it turned out to be?! A sewing machine!!! You should have seen me, I looked around to make sure no one else had seen it first. And it was donated just yesterday too! Now, I don't need another sewing machine. I already have two and one serger. But come on, could you have resisted? I couldn't. You know why? The price was right. How much was it, you ask?
$29 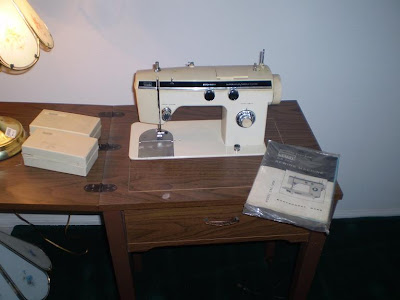 It's a Montgomery Ward - Model number URR 1839. I have no idea if it's any good, but the light came on and it ran when I pushed the knee pedal. It also came with a box of cams, the manual, two feet, six bobbins, and some screwdrivers. The strange thing is, when I was browsing the store prior to this discovery, I saw a box of cams in the "bric brac" area, and was a little sad, thinking someone had a machine somewhere that could use them, but they had been orphaned.
It turns out it was the same brand! I went back after finding the machine and grabbed that box in addition to the one included with the machine. 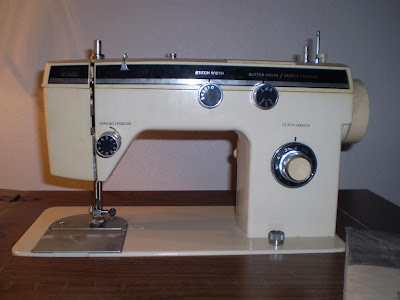 Well, off I go to clean up my thrift store finds (see what can happen when you go in to donate stuff you don't use?) It's amazing, because I'd been meaning to go drop off that stuff for months, and finally got a chance to drive over today... Yaaay!
Posted by Sew Shy at 7:32 PM