Slowly getting my feet wet again. 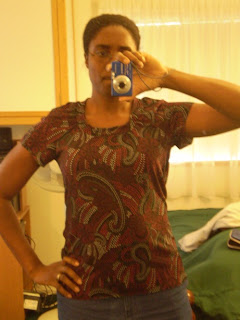 I decided to re-enter the garment sewing arena by working on something quick and simple. Alas,
the project I picked was doomed. I now have an unfinished project due to it. The object in question is my rendition of New Look 6762. I did a quick search on Pattern Review after cutting my pieces out and realized that others had issues with the neckband. My neckband didn't turn out too bad, but the shoulder darts???? I still don't get exactly how they were supposed to work. Ah well, whatever. It's just basted together now, and I didn't feel like fighting with it. To the unfinished pile it went. It doesn't look too bad in the picture, but the shoulders are really wacked up.

Enter my next project. With the weather getting colder, and my having to be in the park and ride for my vanpool at 5:15 am, I've been feeling underdressed in my corduroy jackets and scarves. I have a larger, warmer coat, but it's not quite cold enough for that. I also have the usual issue with my other store-bought warm clothes - the arms are too short. Now that I live in a colder part of LA county, I really can't get by with cold wrists. So... for the past few weeks I have wanted to make myself a fleece jacket with arms that are long enough.

I dug through my stash looking for a pattern I could make up with one of the two pieces of fleece I got at Joanns last year and came up with two options -Simplicity 3563 and Simplicity 4032 . Both have mostly favorable reviews on PatternReview.com - which was a great sign! I finally picked 4032 to work on based on the number of pieces (tee hee!) It had fewer pieces to put together. I also was not so sure the pin tucks in the other pattern would look flattering on me, so I figured I'd try this one first.

I didn't bother making a muslin, because this is not meant to be a fitted garment. I really just wanted something with arms that are long enough and can go over my clothes. Plus, this is supposed to be my re-introduction to sewing clothing for myself, right? So no stress(aka fitting) allowed =). 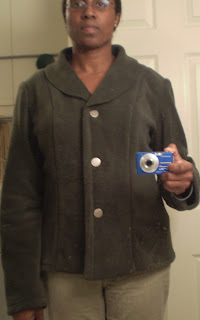 I traced a size 20 pattern on Monday night and cut the pieces out on Tuesday night. With a few steps completed each day, I finally finished the jacket this evening. I'm quite pleased with it! I think it makes me look a little chunky, but again, it's not fitted, so I'm not bothered. I made some minor changes during the constuction process:
1. Lengthened the sleeves by 4 inches
2. Omitted the bow on the collar
3. Topstitched about 1 inch from center front on each side
4. Added button tab to the back of the jacket (bc it looked blah otherwise)

I can't seem to take decent pictures of the jacket on myself, so my dress form was the perfect stand-in (hey, at least I'm using her for something!). 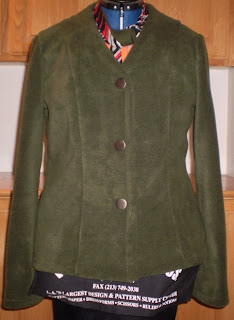 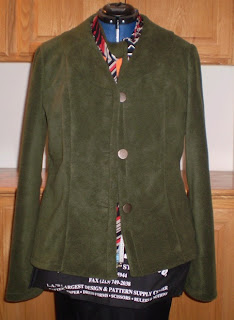 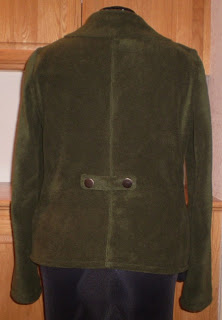 I also had some buttons I bought a while ago just because I liked them, and I think they work with this jacket. They're metal with a gunmetal finish. I wouldn't have thought of them for a fleece jacket, but I liked the way they looked. With only 4 in my stash, I had to make a quick run to Joann's to get two more. 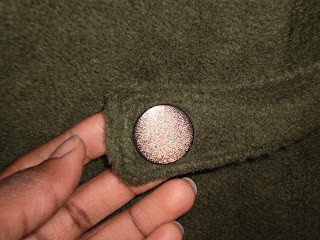 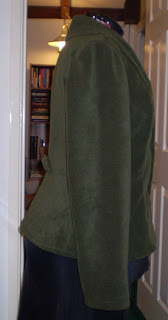 The one thing I did for the first time ever on this project was use the one step buttonhole feature on my sewing machine. How fabulous! It's awesome! I had to help it along sometimes since the thickness of the fleece was somewhat challenging, but I still ended up with great buttonholes. I can't imagine what a nightmare it would have been to make them using the 4-step error-prone process on my older simple machine! I no longer have a reason to fear buttonholes.

This jacket has been a real confidence builder for me! Plus, I now have something to throw on in the morning until it gets cold enough to wear my wool blend coat. Simplicity was true to it's name with this pattern.

A jacket that covers my wrists and isn't the usual boring shapeless fleece? PRICELESS!
Posted by Sew Shy at 9:44 PM