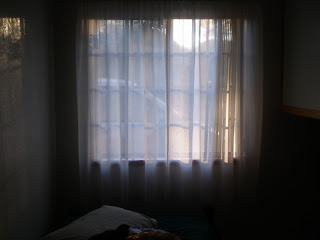 So... I still haven't gotten back to garment sewing, but I'm certainly trying to work my way back up to it.
I took some time out on Sunday to start on curtains for our new place. I managed to get just two sheers done (yes, I'm slow) for one room using some of the the crinkle voile I purchased last week.
I don't actually have plans to put real curtains in since the house has blinds in each window. However, with blinds, it's impossible to maximize the amount of light in each room without giving the neighbors a view of our living spaces. 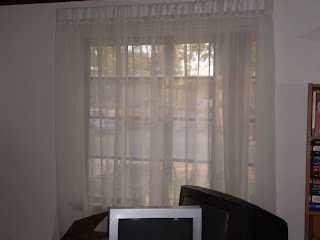 Enter sheers - they'll let in light without inviting prying eyes. I took the lazy route and didn't prewash the fabric (yes, very lazy) since it is 100% polyester. The fabric is 108 inches wide, and I (again, too lazy) just left the selvages on the sides.
I spent about two hours trying to get a consistent rolled hem on my (otherwise useless) 925D serger. After 1 broken needle, 3 broken looper threads, and lots of wasted thread, I "cried Uncle".
At that point, I was too frustrated to be bothered trying the same thing on my good serger - the 1034D. I just switched to my sewing machine. 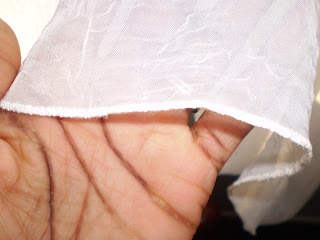 Using an overcast foot gave me a more attractive edge (to me) than the serger had been doing, so I'm glad I made that choice. However, as is common knowledge, the sewing machine is a SNAIL compared to the serger. I'll have to figure out the rolled hem for my next set I make.
The drapery hardware was already in place when we moved in, so I had to work with what was there, and so just created a simple pocket at the top. I did think about having ruffles at the top, but decided to conserve fabric instead.
Now, I just have to figure out how to keep the sheers from blowing too much when the windows are open... Either way, I like them!
Posted by Sew Shy at 8:18 PM