I finally sewed SOMETHING!

It took me ages, but I finally got in front of the sewing machine and created something today. I stayed home today because my eyes have been watering the last few days. This morning my eyes were red, and I was convinced I had conjunctivitis, so called in sick.
30 minutes later, my eyes were no longer red, but were still watery. So I spent the morning trying to find out if I could see a doctor (times when I wish I had PPO instead of HMO) Frustrating, but I eventually got a call back with an appointment for tomorrow. In the meantime I got some antihistamine eye drops recommended by the pharmacist. I'm hoping the doctor can figure out what is wrong with my eyes tomorrow...

With the afternoon off, I baked some cookies for the hubby (I'd promised him I would), and finished up a cover for my sewing machine that I had cut out last night. 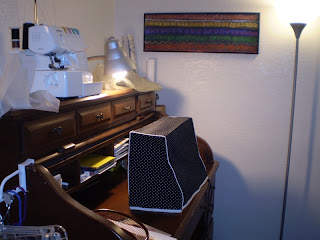 I'd gotten tired of the plastic cover especially since it doesn't cover my sewing machine completely.
As I've mentioned before, I really like piping/cording, so I took the liberty of adding some to my project. The piping was made by *moi*, although it took longer than I anticipated. I tried creating the bias strips using the method where you cut one continuous strip, but somehow messed up, and had to sew each one together. I'll try again the next time I need bias strips. 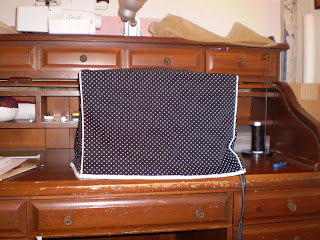 I also bound the bottom edge with the same strips I used for the piping (without the cord). To add some visual interest (and also because I'm not that good at stitching in the ditch - and it would show here), I used one of my machine's stitches for the topstitching. 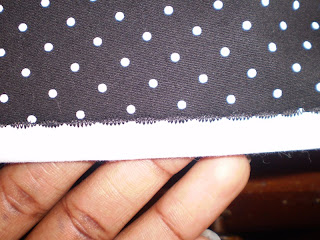 Of course I now realize I should have gotten some batting and quilted the fabric so the cover would have more structure. Bah, next time! This is how I learn, no?

I also purchased some crushed voile to make sheer curtains with. Our windows currently have blinds, and I'd like to let the light in without people being able to see directly into the house. I've never sewed sheers before, so am dealing with a bout of "analysis paralysis". Hopefully I can overcome that by this weekend.

And finally, for those of you who wonder why I never show pictures of myself (aka Mimi), here is a recent picture of me - (gasp!) - with my face!! I can't promise this will happen again though - blame it on my paranoia... 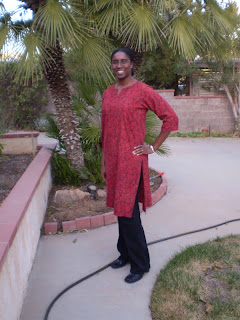